The first thing that comes to my mind when I see holes in my garden is MOLES! 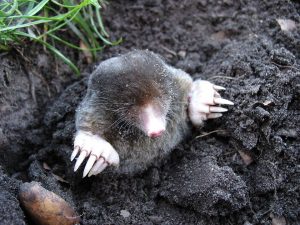 Moles go about tunneling underneath gardens and lawns and piles up mounds of soil over the ground. Nobody with a love for gardens or pretty green spaces is a fan of these putrid looking holes. One of the most common doubts that people hoard is if a mole can see. In this article, we are going to shed light on the eyesight of moles.

Moles are fossorial animals that adopt a lifestyle of digging. They live primarily underground but not entirely. The structure of their body is cylindrical in shape and had a velvety coat. Their eyes and ears are inconspicuous. They have large paws that help them in digging.

How can moles survive underground with low oxygen?
The blood cells of moles have a special kind of hemoglobin which has a higher affinity for oxygen. In addition to this, moles make use of the exhaled air thus utilizing the oxygen in an efficient way.

What do moles eat?

Being omnivores, moles primarily survive on earthworms and other small invertebrates or even variety of nuts. Moles can eat up to the weight of their body worth of earthworms every day. It is a common misconception that moles dig to eat roots of plants but in reality moles actually dig to eat earthworms or other small invertebrates found in soil. Moles have a toxin in their saliva that paralyzes the earthworms which also means, moles can store their food to eat later. There are a few larger species of moles that have been known to eat mice too, by catching them at the entrance of the burrow.

Do moles have eyes?

Moles do have eyes but are really small and often covered with fur and sometimes even skin. This is so because they rarely use their eyes underground. and the most active body organ is their nose.

Moles have fully developed retinas that have working cells meaning they can detect light even if their eyes are covered with fur or skin. They cannot see very clearly but they aren’t entirely blind.

How effectively moles can see?

As mentioned above, moles cannot see very clearly. Some moles can only detect light and know when it’s time to be hunting or can sense movement and scent through the sensors present on the tip of their nose.

Can all types of moles have eyes?

All types of moles do have eyes but are not effective in seeing. The eyes are often covered by fur and a thin layer of skin.

How moles find their way?

The straight answer is that they do follow their noses and no whiskers involved to find their way. The noses have tiny touch receptors called ‘Eimers organs’. Like whiskers in most small mammals and fingers in humans, Eimers organs serve the same function. When their noses touch the ground repeatedly, the mole can distinguish between different objects and find its way in the dark. The Eimers organs are composed in such a way that there are numerous nerve endings around the skin cells that act as a receptor of pain.
The moles appear to just swim through the earth. A lot of power packed strokes help them to shift a lot of soil like a shovel does, behind them as they go on digging. Findings say that a mole can exert a force up to 40 times their body weight to dig tunnels. Moles have not been studied as most other animals because moles are not easy to capture.

Even though moles are no potential threat to humans, moles can cause serious damage to your lawns. The moles do not eat roots as the popular belief goes by but their tunneling does cause damage to the grassroots which turns the ridges brown more quickly.
To protect your yard from all the damage, you can lay a trap for a mole and kill it. But if you are not much of a killer, then there are a few other remedies that will help you keep moles away without hurting them.
You can use castor oil 1/4th cup, blend it with 1 Tablespoon cayenne pepper, and 2 Tablespoons liquid dish detergent and add 6 tablespoons of water and blend it again. Once you have the potion ready, sprinkle it all over your lawn.
To deter moles and to also the add some more aesthetics to your lawn, you can try planting daffodils, marigolds or even alliums.
If you identify a mole hole, what you can do is, put dry ice inside their holes. The carbon dioxide emitted will suffocate the moles thereby making them try and move to a better place.
If nothing works, you can always resort to calling pest control professionals to rescue you from your mole predicament.