If you are a guardian to a cat, you would relate to the paranoia of letting your cat out at night. With both human and motorized traffic at night becoming less, it’s the time for most animals and critters to come out and dwell in the darkness. Sharing an urban space with animals that are predators by nature can be quite a matter of concern, especially if you are a parent to a domestic animal which can come across as defenseless as you in the face of the wild.
“It is a stupid goose that listens to the fox preach” 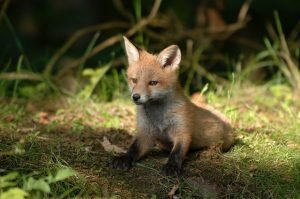 It is an old French proverb that hints towards the cunningness of a fox. The fox is known for having the reputation of being sly. From children’s stories to old proverbs, foxes have been known to be infamous cunning predators. Do they really deserve all the passive hatred? Let’s find out.

What Does A Fox Eat?

Fox is an opportunist animal. A fox will eat any animal that comes easy. Foxes are omnivorous by nature. The list of what a fox eats is really never-ending. The food habit of a fox has a wide range. They are massively adaptable and their food habit changes according to the seasonable availability. From scavenging on a roadkill to eating small animals like rabbits to rodents to birds or even reptiles, a fox can eat anything and everything.
However, according to different seasons, the food preferences do change. In summers they eat lots of insects, while in winters their food preferences change to mammals.

While sharing urban spaces, it has been found that cats and foxes usually ignore each other. Other cats or animals and cars pose a much greater threat to domestic cats than foxes. However, keeping in mind the wild nature of a fox, it would be foolish to rule out the possibility of a fox attacking a cat. It’s only smart to be realistic about such scenarios.
Foxes usually don’t eat cats. However, an old cat that is weaker could be a prey to a fox. A cat that can defend itself cannot be easily killed by a fox. Territorial fighting between neighboring cats could be the reason behind most cat injuries. In most cases, cats chase foxes away.
During ‘cub season’, it’s only natural for a vixen to take on anyone or anything to protect their younger ones. Can you blame them?
Cats are infamous for their notorious curiosity after all and the concern is only well-founded.

Are Foxes A Threat To Domestic Cats?

A fox is a predator, yes. But it is highly unlikely for a fox to kill a cat or be a threat to a cat. It a genuine concern of owners to harbor the fear of having their cat attacked by a fox. A fox’s natural tendency is to flee rather than fight, when faced with sharp claws and pawing of a cat, a fox usually runs away. A well-grown cat is as big as a fox and is pretty well at self-defense. However, small cats or kittens are what at risks of being at risk.

A mangy fox is definitely a threat to a human or a pet as it roams mostly irritated and unafraid. A fox usually does not attack so easy. Foxes are shy in nature. They are only the most dangerous when they are rabid. And it is best to not approach a fox or to play with it.