Everyone likes to keep their home clean and tidy and especially bug-free. Spiders are one of the more scary bugs you will find in your house.

Your home is your castle as the saying goes, and nothing can fill a homeowner with more dread than coming home to find spiders webs in the corners of your rooms. As much as you clean and vacuum these creepy critters always try to make your home theirs.

Getting rid of spiders in the home or apartment can be quite difficult as they more often than not build their webs in hard to reach and often undisturbed places such as inside the roof, attic or basements. From there they can spread to all corners of the house pretty quickly if left unchecked.

Traditional methods such as direct contact sprays and vacuuming may work in the short term to remove these unwanted guests, but if you can’t get to the source of the problem, it will be a constant uphill battle to get rid of them.

In this article, we will be looking at the best bug bombs for spiders available on the market as well as how to effectively use them and some of the key considerations when using a spider fogger.

What is a spider bomb?

A spider bomb, also commonly known as a bug bomb, is a total release fogger containing pesticides which are release using aerosol propellants to fumigate a wide area such as a basement, apartment or attic. The difference between a contact spray and bug bomb is that all the pesticide is released on application to cover the widest possible area and the penetration of all the nooks and crannies.

Do bug bombs for spiders work?

As long as you do not have a chronic spider infestation requiring the services of a professional pest removal service, spider bombs work well.

The commercially available spider fumigation bombs for use in the home can be very effective. So the short answer is yes, as long as they are used correctly they do work.

What If There Is Heavy Spider Infestation?

If there are a lot of spiders, then you may find it difficult to get rid of them using a few bug bombs in your house.

In that case, I recommend taking the help of an exterminator.

They are professional, and you will be completely satisfied after seeing a pest free house.

So, if you can afford an exterminator, then why not hire one.

But, how much does a spider exterminator cost?

The answer is, it depends.

But, here, you can find out the exact amount for your house using the exterminator search tool.

You just have to fill in the details, and give some specific information about your pest problem.

And, you’ll get free quotes from some trusted & licensed local exterminators.

Here, you can find an exterminator if you want.

How to Use Spider Bomb in House

Before using any total release fogger in your home it is critical that you follow these safety tips and precautions:

Pesticide manufacturers are required to include important safety and usage information on the product label. In order to understand the risks and proper usage of the product, it is crucial that you read all of the sections on the label i.e. Dangers of product, poison information, warning descriptions etc. very carefully.

Pesticide manufacturers test their spider bomb products to determine the safest and most effective amount of pesticide to use per square foot of target space. Using more spider bombs than is recommended by the manufacturer is not only a waste of money but also increases the health and safety risks that can come about by using these products.

It must be remembered that once you set off a spider bomb in your home, the pesticide will fill the room and then eventually settle on all surfaces. Always cover or remove any foodstuffs or toys which may be exposed. This is especially important when it comes to small children as they tend to put their toys and other objects in their mouths. Put exposed foods in the refrigerator or sealed containers, or use garbage bags as temporary storage for the toys the child may play with.

The aerosol propellants used in spider bombs are extremely flammable, and more often than not, people tend not to see the potential dangers this may pose. A random spark may ignite the fumes in the air causing untold damage to your home and possessions.

As a rule of thumb always unplug any appliances, refrigerators and air conditioners within the room or rooms to be spider bombed. If you use gas, make sure the pilot light is off. As an additional safety precaution, always try and place the spider bomb at least six feet away from any potential source of a spark to avoid accidental ignition of the propellant.

This may be considered a no-brainer, but you would be surprised how many people simply ignore this critical step in the use of a spider bomb. Remaining in close proximity to an activated spider bomb is a massive health risk and exposure to the pesticide must be avoided at all costs. Simply put, make sure you have a quick and easy exit from the room or house in place before you set off the spider bomb.

Depending on the brand and product used, you will need to vacate your home or premises for several hours before returning after you have activated the spider bomb. Returning home early may pose a health risk as the pesticide has not had a chance to settle and is still in the air.

Rather plan a date and time to use the spider bomb/s when you will be away for some time, perhaps a dinner date or taking the kids to the park or other recreational activity. Stay away from the premises for the minimum time indicated on the product label.

After returning home after the recommended time as indicated on the spider bombs label, open all the windows of your home for a minimum of one hour to properly ventilate the area, it is recommended that family members do not enter the house until after this one hour period to ensure any remaining airborne pesticide has dissipated.

Again, follow the label directions. After the prescribed amount of time to allow the product to work, open as many windows as you can. Leave them open for a minimum of one hour before you allow anyone to reenter the home.

If you want to know more about the safety precautions while using bug bombs, then this is a good article.

Raid is one of the most trusted brands on the market when it comes to eliminating pests. Apart from killing spiders, the raid Deep Reach fogger effectively eliminates all other household pests with ease.

The fog is able to penetrate deep into cracks, crevices, behind furniture and other hard to reach areas where those pesky spiders like to nest. One can of raid fogger has enough propellant to treat an entire 25-foot x 25-foot room with an 8-foot ceiling.

According to the manufacturer’s specification, the Raid fogger’s special formula keeps on killing spiders for up to two months after use making it a cost-effective product to use.

The Hot Shot Indoor Pest Control Fogger is known to be one of the best on the market. This fogger is reported to be able to deal with and eliminate larger infestations of spiders in the home.

Cracks, crevices and other hard to reach places are not an issue for this fogger, the formula gets in and starts killing. As with other foggers, the Hot Shot also targets other household pests.

Just as with the raid fogger, the hot shots formula enables the killing of spiders and other pests for up to a period of two months. 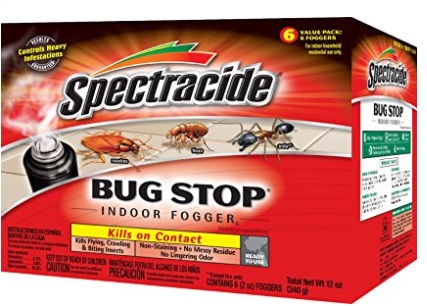 The SpectracideIndoor Fogger is also one of the top spider bombs on the market today. The fine mist penetrates deep into all cracks and crevices to flush out and kill most hidden spiders on contact as well as other household pests.

The Spectracide’s specialized formula will not do any harm to upholstery, carpeting, drapes or any wooden surfaces or tiles. As with most of the top-rated foggers, spectracide will not leave any wet or messy residue after use.

As with all foggers, it is advisable to properly ventilate all the rooms after use.

These are some of the best spider foggers on the market and will be very effective in removing any spider infestations. But even these products have their limitations. If your infestation cannot be solved by these off the shelf foggers, then it is advisable to call in the experts.

As with all chemicals and poisons, careful reading and following the manufacturer’s instructions will ensure the safety of home and family members.