If you have an abhorrence towards an eight-legged anything, you are definitely not going to be pleased with these facts about a scorpion. 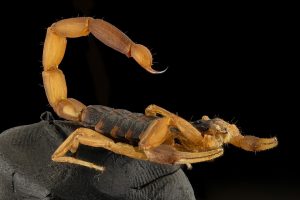 These predatory arachnids are of the order scorpiones. The second pair of appendages, the pedipalps are the distinguishing feature of a scorpion apart from a venomous stinger that curves forward over the back.

Evolutionary origins of a scorpion can be traced back to the Silurian period 430 million years ago. Scorpions are very adaptive in nature. They survived a wide range of critical environmental conditions. There are almost 1750 species of scorpions that are known to humans.

In Revelation, 9:5, 6, we
read, “And their torment was as the torment of a scorpion when he
striketh a man, and in those days shall men seek death and shall not
find it: and shall desire to die, and death shall flee from them.” And this is how a scorpion has been talked about in the Bible. Does this not torment the minds of the readers? Of course, it does. But does a scorpion actually But how much does a scorpion live up to its notoriously terrorizing reputation? Let’s find out.

These fiery and feisty insects can be a real threat to humans as well as other animals. They are so easily agitated and carries on an attacking rampage that it is said that no other animal destroys each other as rapidly as a scorpion does. In an experiment, a hundred scorpions were kept together in a glass vessel. It was surprising to see how fast they went on killing each other and at the end, only fourteen were left alive.

How Deadly Are Scorpions to Humans?

A sight of a scorpion usually seems to be the sign of impending danger. However, the truth is, not all scorpions are killer scorpions. Only a few of them are deadly to humans. Most of the species are equipped with venomous stingers potent enough to just kill insects and animals they prey on. Only about 25 of the known species stings are fatal to humans when stung.A few of the deadliest scorpions that can prove lethal to humans are

The Arizona bark scorpion (Centruroides sculpturatus): Considered the most dangerous in North America, this scorpion measures up to 3 inches in length. If you are wondering how lethal can it get? In the 1980s, 800 people in Mexico had to embrace death after being stung by this deadly scorpion.

The Brazilian yellow scorpion (Tityus serrulatus): The sting of this scorpion may cause a state of ‘hyperesthesia’ which is the term known to describe a state in which the patient is extremely sensitive to touch throughout the body. However, most people usually get away if stung, with secondary symptoms like nausea, stomach cramps, rapid heartbeat,etc.

Arabian Fat-tailed scorpion (Androctonus crassicauda): It should not be difficult to guess that it is found in the whole of Arab. It is a relative of the yellow fat tail scorpion.

Deathstalker (Leiurus quinquestriatus): It measures on 2.5 inches but you would want to steer clear of this kind. This kind is found throughout North Africa and the Middle East. Its venom makes up for its puny size and can take the life of a perfectly healthy adult.

What Do Scorpions Eat In The Wild?

Scorpions usually feed on small insects like crickets. Mantis, lizards to spiders. Sometimes even small mammals like mice become food to scorpions. Scorpions usually prey on live insects and animals. They use their pincers to capture their prey and paralyze the prey with the help of the stinger.

If you think this is ruthless and cruel, wait till you learn about the next fact that might just blow your mind away. The prevalence of cannibalism among some scorpions! Yes. In some cases, the female scorpion kills and eats the male after mating. If this is not weird, I don’t know what is.

What Do Scorpions Eat In Captivity?

Scorpions make very exotic pets. Adult crickets or mealworms are an ideal food choice for scorpions in captivity. Nonetheless, a scorpion will eat any insect or small animal that it can grab with its pincers and crush till the prey is killed.

How Long Can Scorpions Survive Without Food?

A scorpion can go as long as 12 months without food. Therefore, if you have a scorpion as a pet, you don’t have to worry about feeding them every day as their bodies can handle nutrition in an extremely efficient way.

Yes. Scorpions do eat spiders. However, in exceptional cases, spiders too can sometimes fight scorpion.

Yes. Scorpions eat a wide range of insects that include roaches.

Yes. Scorpions do eat lizards and many other different animals and insects.

There have been scorpions caught in the act of eating termites. So, yes. Scorpions do eat termites.

If the pest infestation is severe in your home, then it’s wise to take the help of Pest Control Companies because due to Corona Virus pandemic all the major retailers are focusing on delivering essential household things.

Therefore, if you’re thinking about buying a pesticide online, then it may take a much longer time to arrive than expected.

Hiring a Pest Control company is not expensive every time. By filling this form, you’ll get the exact free quotes from the top local exterminators.

Believe me, it’s not that expensive.

At least, you’ll know, how cost-effective it can be to hire a Pest Control company for your little home.

The choice is yours.

Getting quotes from multiple Pest Control Companies (which is free), then decide, hire one or not.

Or, buy a pesticide, and wait for the next many days under the pest infestation, frustrating about the late delivery because they can’t deliver your product in the next one or two days.

Even though a scorpion can survive for almost a year without eating, if you fancy scorpion as a pet, take on the responsibility to at least feed it every two days. If you own a communal tank, to ensure there is no cannibalism inside the tank or to keep the harmony going smooth, provide enough food for all the scorpions.
In the end, a scorpion is a king of its own kind. It is only best suited when it lives in the wild and come out at night to hunt and prey upon other smaller insects. It is ruthless to even consider keeping such a free roaming animal in captivity. But in case, you do, make sure to take proper care.